Apprenticeships for the Teaching Profession: A National Model

Securing teachers for current classrooms has reached a crisis. An article published by the University of Massachusetts Global, “Teacher Turnover: What you need to know and how you can curb the trend”, explains the impactful teacher turnover rate experiences across our nation.  “Eight percent of teachers leave the profession each year. When you consider that the same portion of educators shifts schools, the overall turnover rate become 16 percent across the nation.” It goes on to state, “…nine out of 10 teachers hired each year are replacing colleagues who left voluntarily…”

As a result of the severe teacher shortage, many school districts, including those surrounding Campbell University, are forced to increase class sizes, limit course offerings, hire long-term substitutes, and hire inexperienced residency teachers who “train as they teach.”  All these solutions can have negative impacts on student learning and well-being. The teacher pipeline is dwindling.

“Our work is being discussed nationally because it provides a solution to these persistent problems facing our field,” Dr. Prentice Chandler, dean of the APSU Eriksson College of Education, said. “Rather than talking about these issues, we have decided to act. This program is the model for solving these problems.” (APSU Apprenticeship Program for Teaching)

About the Speaker: Dr. Prentice Chandler 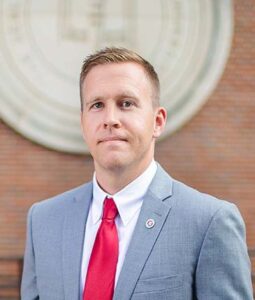 Dr. Prentice Chandler is the current Dean and Professor of the Eriksson College of Education at Austin Peay State University in Clarksville, Tennessee.  From 2013 – 2017, Dr. Chandler was the Associate Director of Teacher Education and Leadership and an Associate Professor of Social Studies Education at the University of Cincinnati (OH). Prior to his time at Cincinnati, he was the Department Chair of Secondary Education and an Associate/Assistant Professor of History and Social Science Education at Athens State University (AL). Dr. Chandler has authored or co-authored over 50 works, including two books on teaching about race and racism within the social studies curriculum. His most recent book, Rethinking School-University Partnerships: A New Way Forward (Chandler & Barron, 2021) examines innovative partnership work taking place across the nation. In 2007, Dr. Chandler was awarded the Defense of Academic Freedom Award from the National Council for the Social Studies (NCSS). In 2018, he was awarded the Notable Leader in Teacher Education Award from the Alabama Association of Teacher Educators. He is a first-generation high school graduate of Clements High School in north Alabama.

The Hobson Performance Center is located in the D.Rich Building 116 State Road 1525, Lillington on the campus of Campbell University in Buies Creek. Parking spaces will be available in Campbell’s Q-Lot and the P-Lot.  Visitors must display a printed copy of the event parking permit on their dashboard (VISITOR PARKING PERMITSOE)

About The Paris Endowed Lecture Series

The Paris Lecture Series is made possible through a gift from Dr. John Viehe. Dr. Viehe has taught at Campbell University for many years after a distinguished career in Military Intelligence. He earned his Ed.D. from North Carolina State University.

The lecture series is in honor of his mother Ethel Paris Viehe, and aunts, Florence Edith Paris and Cora Paris Hagen. The Paris sisters dedicated their lives to serving and educating others.

The Paris sisters were exemplars in the field of education, examples for current students to emulate. Each was born in the city of Buffalo, New York and remained in education long enough to retire and earn a pension. When they entered the field, most teachers were prepared solely at two-year normal schools. Some obtained additional higher education. Among New York State’s major cities, Buffalo had the highest proportion of teachers with no formal education beyond normal school.

However, the Paris Sisters did not follow this trend. Each graduated from Buffalo Normal School (now SUNY Buffalo State College) and then earned a bachelor’s degree at the University of Buffalo (now the State University of New York at Buffalo). Subsequently, each of the sisters earned a master’s degree from an Ivy League University.

Firstborn Florence also acquired a Principal’s Certificate and became the youngest and first female principal in the Buffalo School System. She served as principal of Buffalo, New York Public School 65 for 47 years.

Cora, the middle sister, later attended Colorado School of Mines and developed a solid understanding of earth science. During World War II, she stepped forward to support the war effort by teaching science courses, including meteorology, to pilots, enabling the opening of an airplane factory which produced over a thousand lend-lease fighter planes.

Ethel had the misfortune of being widowed with four children under the age of 11; she immediately returned to teaching and became Chairman of the Science department at Hamburg, New York High School. She was awarded three National Science Foundation grants to study specialized advanced topics. She imparted the importance of education to her four, each of whom subsequently earned a doctoral degree.